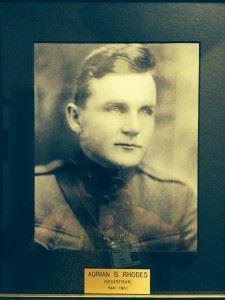 Who Was Adrian B. Rhodes, the Namesake of the Armed Forces Reserve Center?

Adrian B. Rhodes (1890-1957) was described in local newspapers as a “popular young businessman” in Wilmington at the outbreak of World War I. A sergeant in the Wilmington Light Infantry, he was activated with his unit and shipped to Fort Caswell in Brunswick County as part of the Coast Artillery.

Apparently seeking more action, however, Rhodes soon volunteered for officer-candidate training at Fort Oglethorpe, Ga. Commissioned a second lieutenant, he was assigned to the 4th (“Ivy”) Infantry Division, shipped to France and was wounded in action in the later stages of the Battle of the Meuse.

Returning to Wilmington after the war, Rhodes worked in the county tax office, which was then part of the Sheriff’s Department. A Democrat, he served as New Hanover County register of deeds from 1922 to 1950. Active in the local American Legion post, he headed up the post’s athletic programs for a number of years.

His son, Adrian B. Rhodes Jr. (born 1923) was a naval aviator in World War II, flying fighters off aircraft carriers in the Pacific Theater and receiving the Distinguished Flying Cross.

The center at Greenfield Lake was referred to as the “Adrian B. Rhodes Memorial Armory” as early as 1958, when the Cape Fear Garden Club landscaped and beautified the grounds.

The center, at 2144 W. Lake Shore Drive, Wilmington [Map this], is scheduled to be deactivated in 2011 and pass to civilian control. Its future use continues to be a point of considerable debate, with local residents opposing federal proposals to adapt it as housing for the homeless.

But why does one sign refer to it as “Adrian B. Wilmington”? It’s anybody’s guess.