This poster is approximately 24 inches high by 16 inches wide.

In 2008, Bob Andrise donated more than seventy politically-related items to the Museum. The collection included posters, bumper stickers from state and national election campaigns from the 1970s, 1980s, and 1990s. The collection also includes two posters related to a January 12, 1979, county referendum to decide if local restaurants could sell liquor by the drink.

The group that put the poster out, the New Hanover County Mixed Beverage Committee, was formed in November of 1978 as the Committee for a Better Way. The most vocal public opposition came from local members of the Christian Action League of North Carolina, a conservative evangelical group with a longstanding record of opposition to the consumption of alcohol.

Residents of the county voted to allow liquor by the drink by a wide margin. Before this law, people who wanted a gin and tonic with dinner in a restaurant had to go to a restaurant with a brown bag permit. There, the diner could consume their own liquor out of a bag. After the 1979 referendum, restaurants had to apply for a Mixed Beverages Permit to have liquor on the premises.

The 1979 referendum was not the first time North Carolinians voted in on alcohol-related issues. In 1908, more than ten years before national legislation passed to prohibit alcohol, North Carolina became the first state to pass prohibition by a direct vote of the registered electors. At that time, the city of Wilmington voted to support prohibition, but New Hanover County voted against prohibition. The state as a whole voted dry. The state's prohibition law went into effect on January 1, 1909, a decade before the 18th Amendment to the U.S. Constitution prohibited the "manufacture, sale, or transportation of intoxicating liquors" in the country. 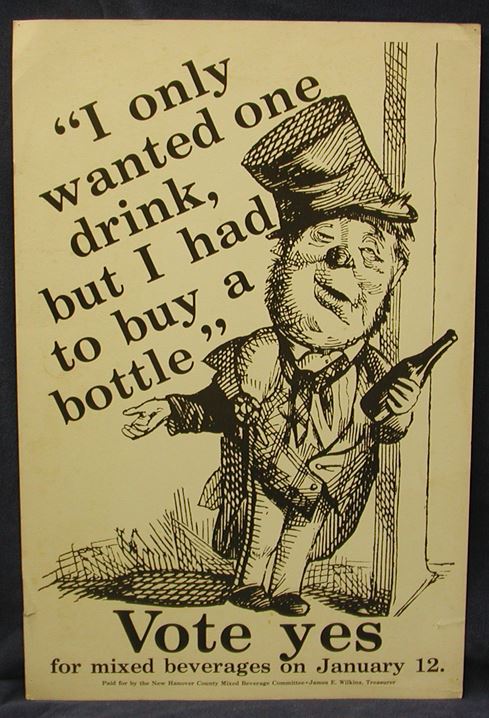