This black and white photograph measures approximately 8 inches by 10 inches.

In 1980, the Cape Fear Museum received a collection of more than two hundred and fifty artifacts from the estate of long-time Wilmington politician James E L. "Hi Buddy" Wade (1889 to 1980). Many of the photographs document events in the city over Mr. Wade's lifetime. This particular one depicts a luncheon at a local restaurant, Fergus' Ark.

The first Fergus' Ark (1952 to 1965) was a floating restaurant moored at the foot of Princess Street in Wilmington. The ship the Ark, originally named the General Frederick C. Hodgkins was built in Wilmington in the early 1920s. According to the restaurant's menu, the Ark had been a banana boat, a floating casino, a quarter boat for members U.S. Coast Guard in World War II, and, in 1946, the U.S. Maritime Commission's office space. Then Ivon Eldridge Fergus (1914 to 1998) bought the Ark in September 1951 and converted it into a restaurant.

Mr. Fergus was born in Wilmington to parents Roy C. Fergus (1885 to 1947) and Grace Bonham Fergus (1888 to 1944). The Fergus family was in the fish business. Eldridge's father, Roy, was also mayor of Carolina Beach. Eldridge worked at the fish market in the 1930s. Locally, Fergus' Ark restaurant was perhaps most famous for being damaged by the USS North Carolina when it was put into its permanent berth on the Cape Fear River. The restaurant reopened, and Mr. Fergus sued the North Carolina Battleship Memorial Commission for $25,000 in damages. The suit was settled in 1965 for a lesser amount.

The first Fergus' Ark closed in February 1965 so that a coast guard facility could be built in its place. Mr. Fergus then opened a Fergus Ark on Market Street and two others on Carolina Beach Road and Oleander Drive. At one point, Fergus owned four restaurants. In 1979, Mr. Fergus retired from the restaurant business. He then went into the broadcasting business, setting up Channel 20, the local Trinity Broadcasting Network affiliate. As for the Ark, it was initially sold to a Florida businessman. Over the next decades, it changed hands a number of times yet it was still afloat in the 1990s, serving as the office of a Florida boating supply company. 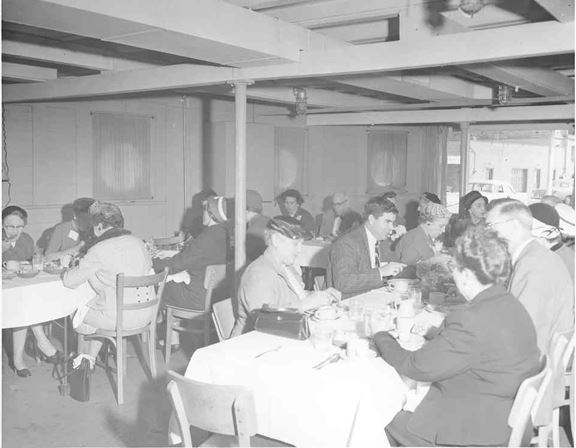