This photograph is approximately 8 by 10 inches. It shows a Stone Towing tugboat with the USS North Carolina.

In 1980, Cape Fear Museum received a collection of more than two hundred and fifty artifacts from the estate of long-time Wilmington politician James E L. "Hi Buddy" Wade (1889 to 1980). Many photographs document events in the city over Mr. Wade's lifetime.

In September 1961, the World War II-era USS North Carolina left dry dock in New Jersey, heading down to the mouth of the Cape Fear River. Its journey had really begun more than a year earlier when the Navy announced the ship would be scrapped. At that point, citizens of North Carolina banded together to save it and raised $330,000 to bring the ship to Wilmington. The battleship arrived at the mouth of the river on October 1. Bad weather delayed the ship, and on October 2, the largest vessel ever to move up the Cape Fear River began to be pulled by tug boats towards the berth.

People lined the river to see the ship. They saw more than they bargained for. The piloting challenges were huge-the boat was longer than the river was wide-and there was another obstacle, a floating restaurant. The North Carolina damaged it. Despite this mishap, the battleship was put into its final position at high tide on October 3, 1961. It still draws crowds more than forty years later. 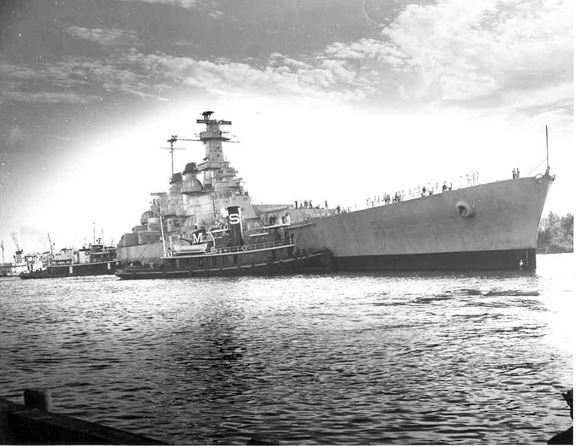 Gift of Estate of J.E.L. Wade